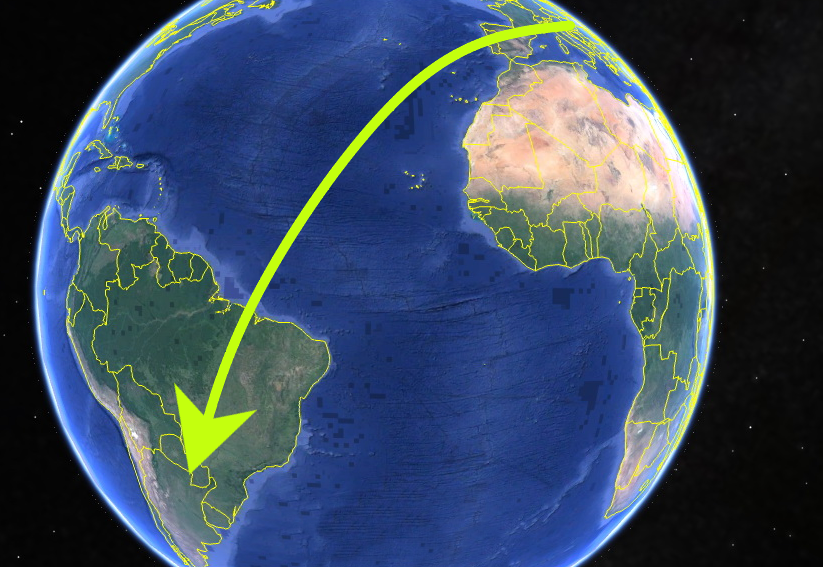 After almost a year spent in Europe, another mission begins: soon I’m going to start a new life in the southern hemisphere. The destination is Chile, where I’m going to teach English in a secondary school for one semester, under a programme by the Chilean Ministry of Education. But don’t rush so far ahead! Until then I still have 17,000 kilometres ahead of me and it would be a shame to just go by air. So instead of a 20-hour-long mind-numbingly boring flight journey, I’ve planned a trip mostly by land that will make me believe that Chile is really far from Hungary.

Designing a trip itself is exciting. Enjoying total freedom while putting the plan together is without doubt a great thing. Any limitation requires me to make compromises and here there is one: the teacher training in the Chilean capital starts within two months, so I need to dismiss the idea of sailing across the Atlantic Ocean. The main reason for this is that this method of travel can easily be affected by some hardly predictable factors – weather conditions, preferable winds, yacht owners’ own plans – and there is no room for error now. But this does not mean that I have to just buy a flight ticket directly to Santiago and to see the world like a carpet made of satellite images rushing past below my window.

Finally the plan has been made. The first leg of my journey will get me from Pápa (my hometown in Hungary) to the westernmost tip of Europe. I will travel 3,400 km mostly by buses and trains, with some short stops on the way. What is more, after a few correspondence, the sales team of Cabo Verde Airlines agreed to have a stopover in the island nation without needing to pay an extra fee. Therefore I’ll be able to make the transatlantic journey in two steps. But hold on, I still need to cross Europe first! 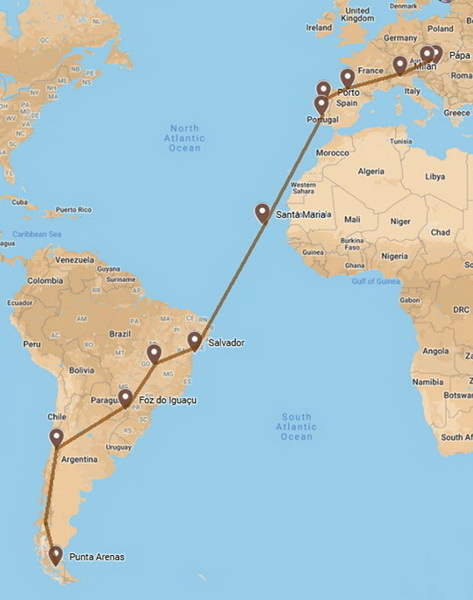 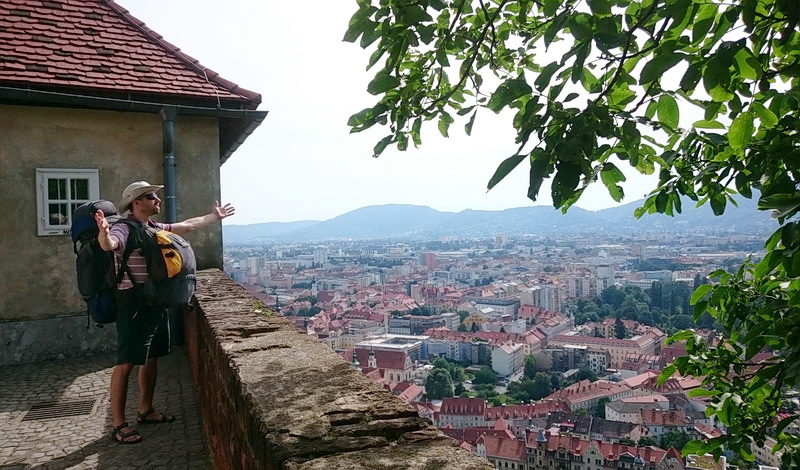 On my back is my house, on my belly is my office. This is still the city of Graz in the neighbouring Austria.

Half a day in downtown Milan should definitely be enough to visit the cathedral and a local restaurant – I thought. I gave up the former idea when I saw the line in front of the ticket office, and the local siesta time woke me from my dream of eating an ossobuco alla milanese (which is a veal cutlet braised with vegetables and spices). It’s better to look for something more exciting than waiting in the queue outside in front of the restaurant that the locals considered the best. 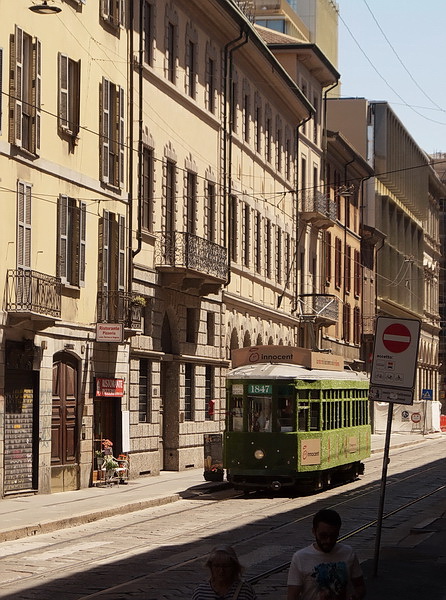 About noon the streets are quiet. It seems that only tourists and trams are moving – here a nostalgic tram covered in artificial grass, is rattling past next to me…

At the same time the wedding crowd is gathering on the piazza in front of the nearby church so I start walking over there, leaving the restaurant behind. But what I find more interesting than a Latin American wedding is yet a few more steps away: under the canopies of the old trees there is a food market with its variety of delicacies: mains, sweets and drinks are all home-made and sold by immigrants and the place looks rather random then an official open-air food court.

There is no siesta here!

For lunch, I try a causa rellena (a layered lemony and spiced cold mashed potatoes with chicken or seafood and mine has beans too) cooked by Peruvian women with passion fruit juice, and I couldn’t have imagined a better dessert than fried banana rolls sold by Filipino vendors – the latter has been missing from my diet for a year! The picture of the venue is colored by white-collar workers from the offices nearby, who apparently has similar ideas about today’s lunch – I share some thoughts with a Colombian and an Australian economist over our meals. 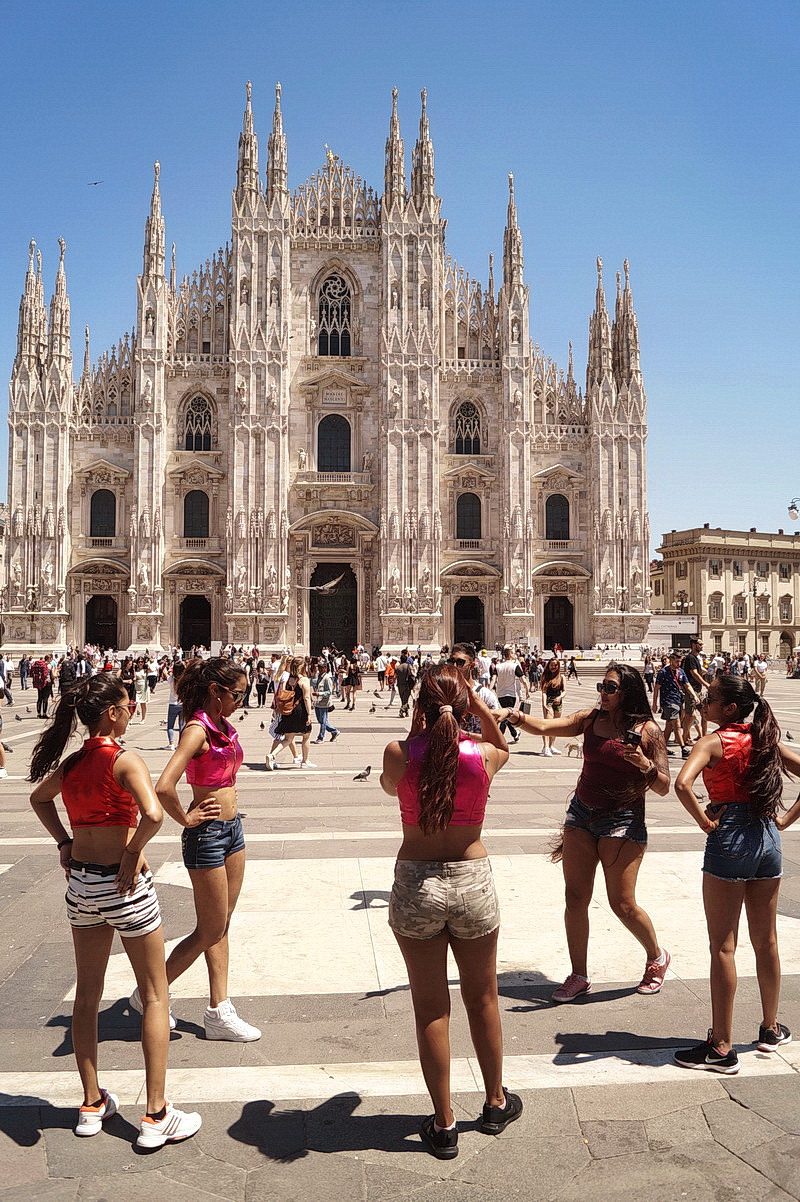 The Duomo di Milano. Due to the endless queue for the entry ticket itself I’m sure I’ll need to try again at another time. But fortunately the gothic building is not less impressive from the outside.

But I gotta leave…

The night bus takes me to France via the Fréjus Valley and tunnel. Since the migration crisis first hit Europe in 2015, the Italian-French border has ceased being one of those that can be passed freely without having our passports and IDs checked – the same is true for the Hungarian-Austrian and other EU borders under the same free movement agreement – unfortunately. Now those who intend to cross to France need to stop and undergo a police check, as the French unilaterally reintroduced border control. Our bus driver – who apparently knows the situation – even stops the engine, from which I guess this stop will take more than just a few minutes. Police officers are getting on the vehicle and starting to check the passports – those with a less Caucasian look, face a deeper check. After the interrogation on-board, several Africans, including a mother with her child, are asked to get off and are retained, they will most probably be returned to Italy. (But I think I’m not the only one who wonders where they will be taken from here.)

The first stop in the morning is already in the Basque Country, more specifically in the Northern Basque Country, where we stop for a few minutes. This is only enough to stretch my muscles after a night of total immobility (have I mentioned I don’t like travelling by long-distance buses…?). So the Basque ethnic bloc starts here in Southern France, stretching north of the Pyrenees, from where its “capital” (biggest city – Bilbao) is still a two-hour ride.

Upon arrival in Bilbao, I invite myself for a simple local breakfast, a Spanish style tortilla (scrambled eggs with fries) and a cortado (milky espresso), which is probably the most common here. 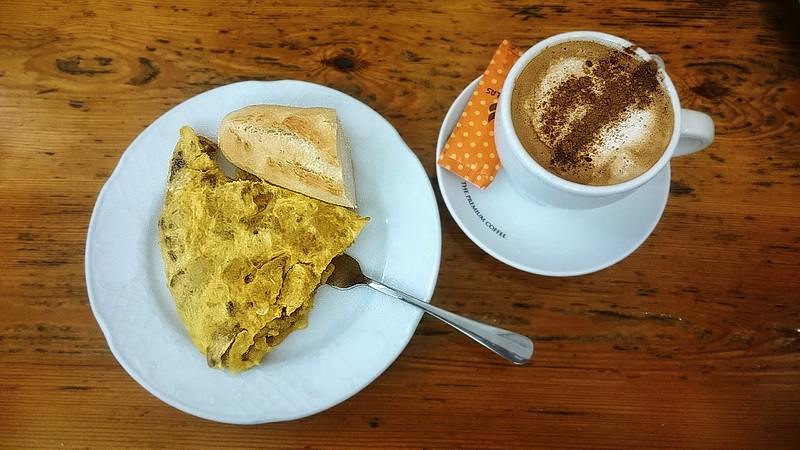 It wasn’t long ago when mentioning the name of this unique region carried a rather negative feeling about it: the Basques were immediately associated with their armed leftist group, the ETA. Their goal to gain independence for the Basque Country finally failed, but the list of acts of terrorism committed by their activists inside and outside of the autonomous region is long, so is the list of the dead. Finally the ETA gave up arms in 2017 and got dissolved the following year. This event was long-awaited, but the Basques still dream of an independent cross-border Basque country. Hence, it is not surprising that I can’t see Spanish flags on the streets, whereas it was difficult not to spot the double-cross red-white-green flag – those are everywhere. And how big some of them are! 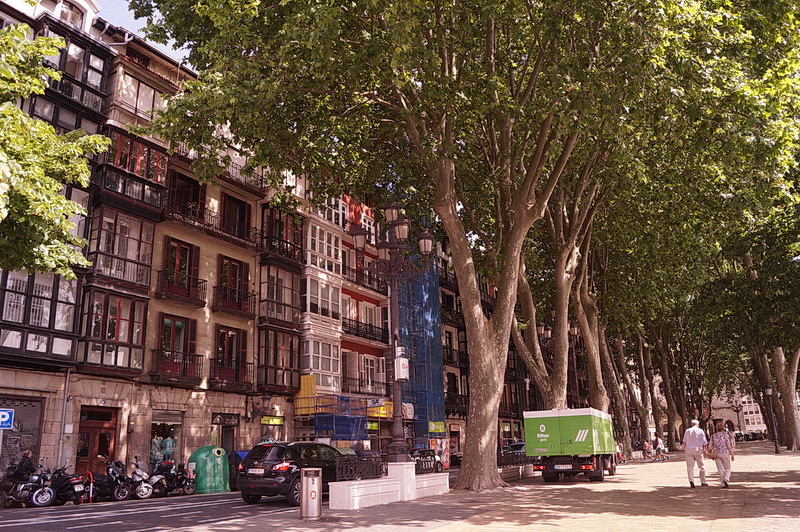 Houses in Bilbao under some of the many giant planes (platanus trees). These buildings could not be complete without the so-called oriel windows (similar to the concept of the bay windows, but starting from the second floor only) dominating the facades all around the city.

After this brief intro, it is worth getting to know the city and its surroundings a little deeper. If not ETA, then? Guggenheim, of course! Indeed, the world-famous contemporary museum has helped the city to build up a positive reputation among global tourists. But Bilbao is just one city of the big conurbation (a metropolitan area with geographically connected population centres). And this urban mosaic with its nearly one million inhabitants has obviously a lot more to offer. 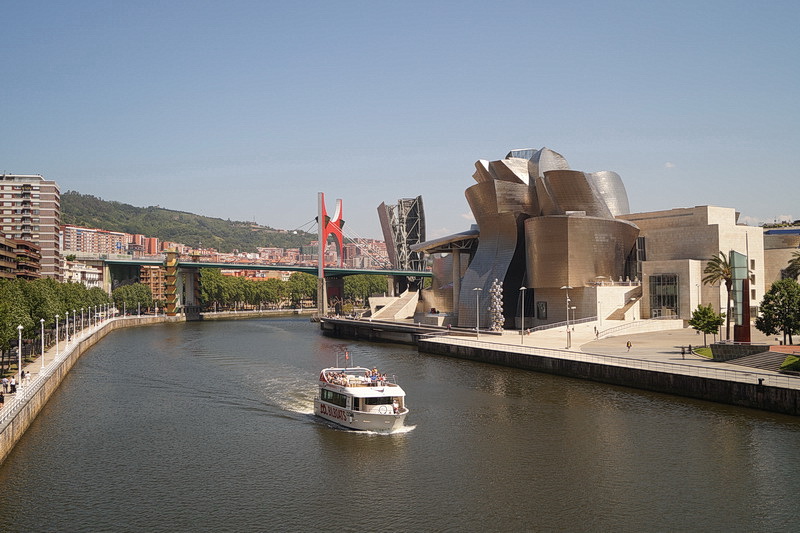 By some, the museum is considered to be the most interesting and remarkable from the outside. 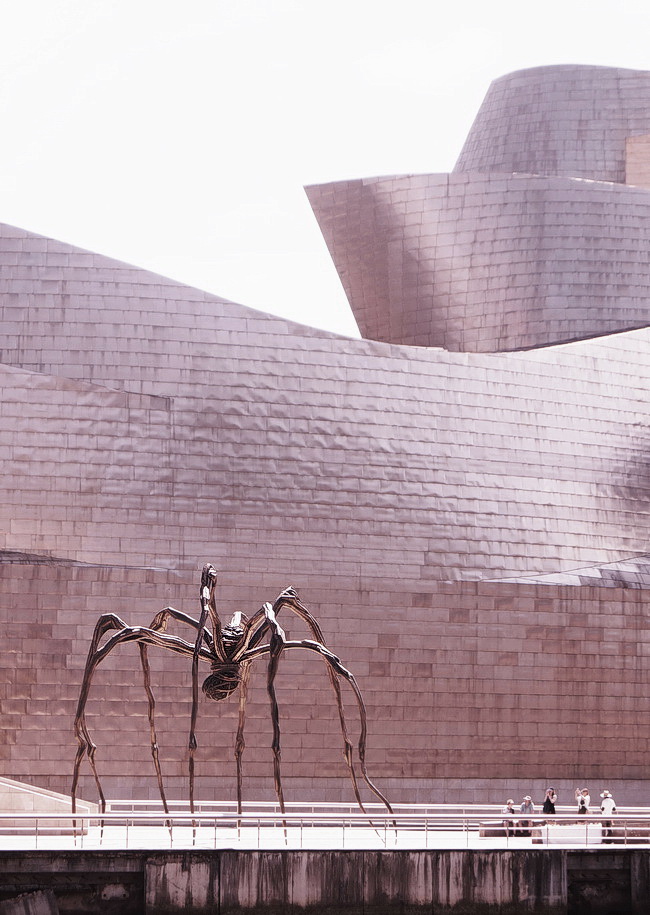 From the balcony: the bullring – a bullfighting arena or plaza de toros, rebuilt after a devastating fire a few decades ago. From above this might seem like a big open eye built between the city’s lush green slopes. 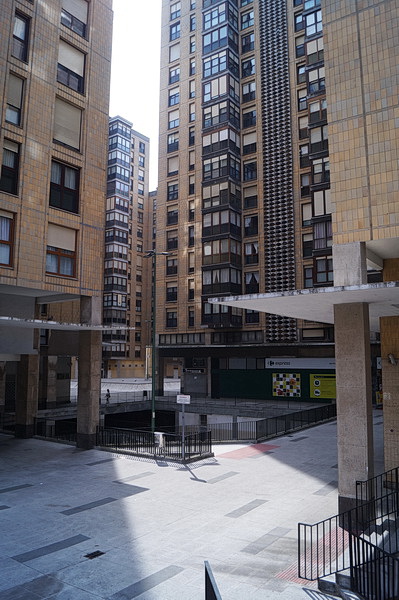 The third dimension had its place in housing construction here too, yet its scale was a way smaller than it was in most socialist countries or even Sweden. 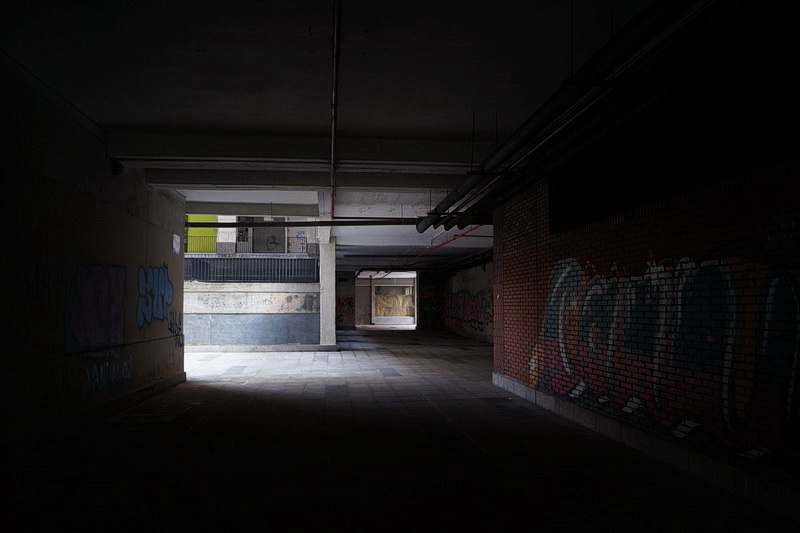 The designers’ dream was to create underground spaces under the blocks for pedestrians, but their popularity among them – despite the full CCTV surveillance – seems to be low.

In exchange for the Hungarian delicacy that I cooked for my hosts the previous evening, my Basque friends invite me to the bistro on the ground floor for breakfast. I try to utilize the few words I learnt on the terrace last night for ordering the meal, but to be honest, with little success… 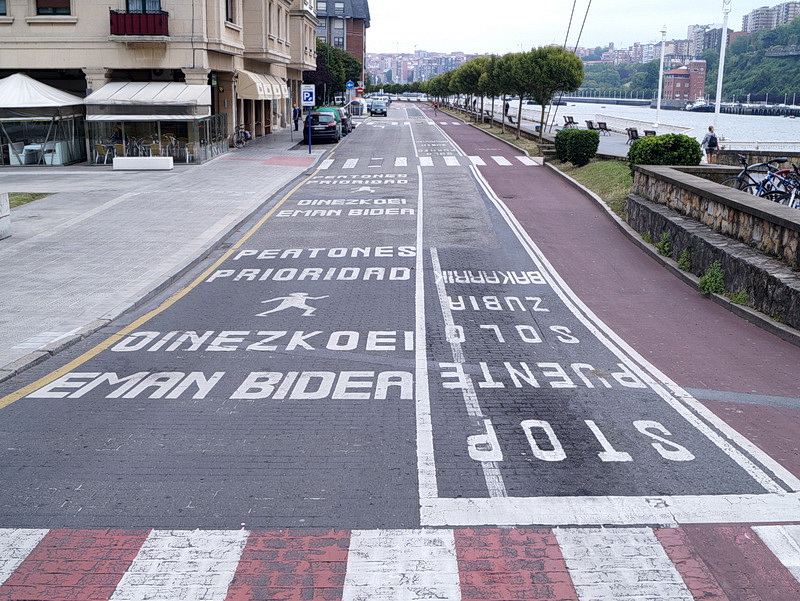 Similarly to Hungarian, Basque tongue is not related to any other European languages either.

I convince myself that museum can wait, say, until a rainy day. And the reason why I’m heading to the railway station to catch a suburban train northbound is because there’s an industrial masterpiece definitely not to miss!

Not only do I save time and money with a daily pass, but I can also try the city’s very colorful mix of public transport services. 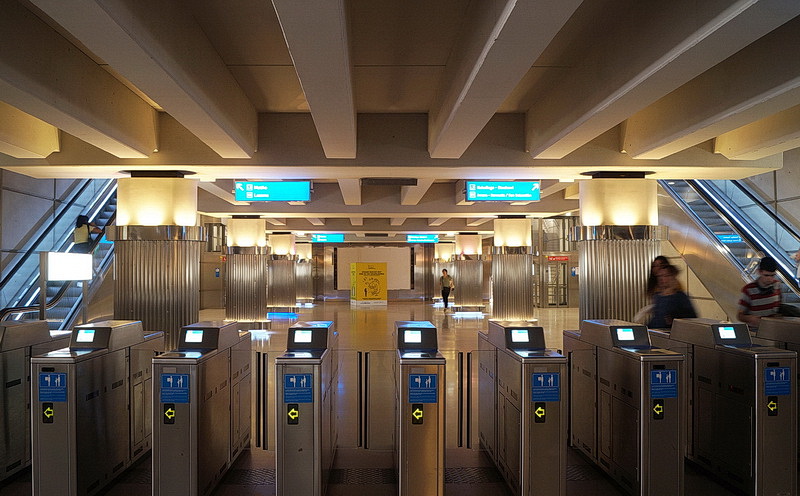 The stations on the ‘Y-shape’ two-line metro network, which opened in 1995, were designed by British architect Norman Foster and his team. 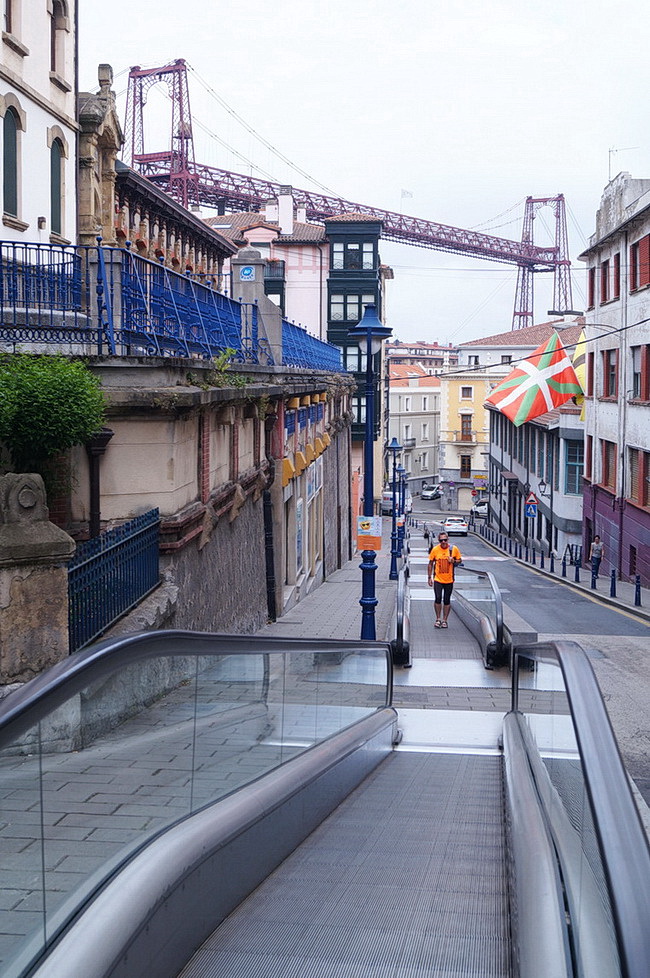 Trains, subway, under and overground suburban trains, trams, a funicular, public elevators and moving walkways. Oh, and take a look at the background, behind the giant flag.

One of the most unique transport solutions in the world is this transporter bridge with its mobile unit shuttling between the towns of Portugalete and Getxo. 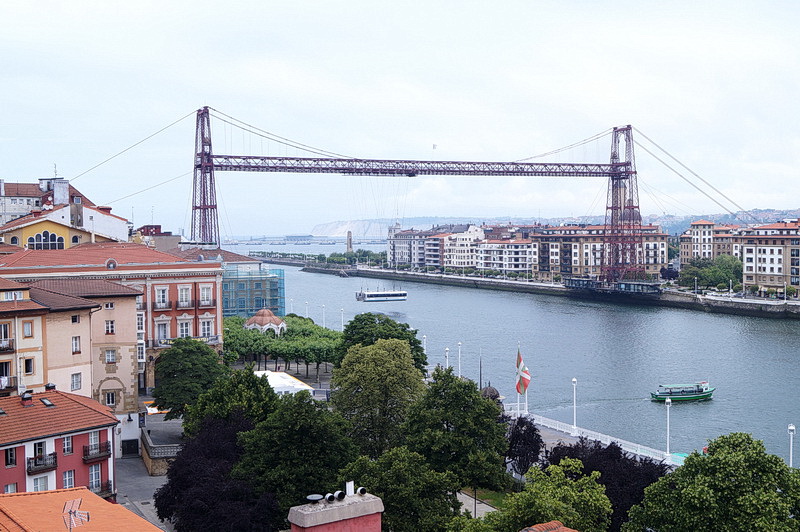 But to understand why this unusual structure and method was chosen, let’s travel back in time: to the end of the 19th century. The task was to find a solution for a transport method that could carry goods and people and could provide a permanent physical connection between the two growing cities, without disturbing the movement of huge (and tall) goods ships heading to or leaving the bustling port of Bilbao. The bridge was opened for the public in 1893 and was the first of its kind, followed by only a few others ever since. According to UNESCO „it is regarded as one of the outstanding architectural iron constructions of the Industrial Revolution”. 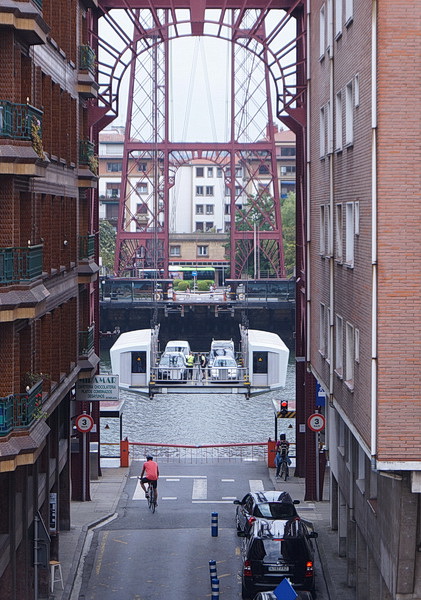 Bridge is approaching! Because of the goods vessels that once reached the port of Bilbao, a traditional bridge could have been built here only with very long and elevated road ramps. 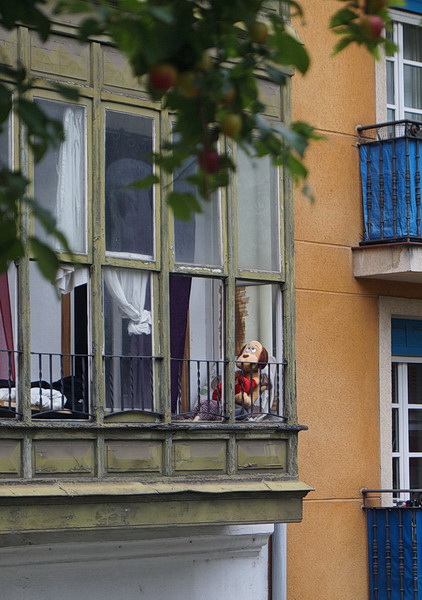 The city is a patchwork of wooden oriel windows.

On the last evening – before hitting the road again – I’m ready to further improve my still non-existent Basque language skills with my friends. At one point they get a little bit sad and upset at the same time while they are talking about their country’s political situation. What a sensitive topic this is for them! They were raised to be a proud member of a community of these great people in an awe-inspiring part of the country with only partial autonomy.

“But at least for some time, there has been peace.” 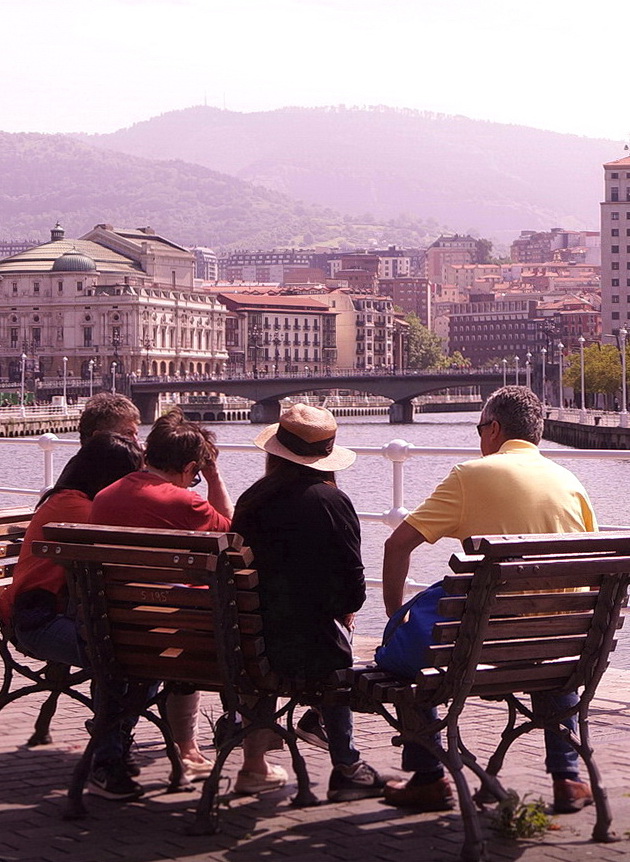 This is the first post. If you liked this story, please let others know about it!

I guess you don’t want to miss out on the next leg of my journey to South America. Follow me on Facebook or Instagram to get the latest stories: 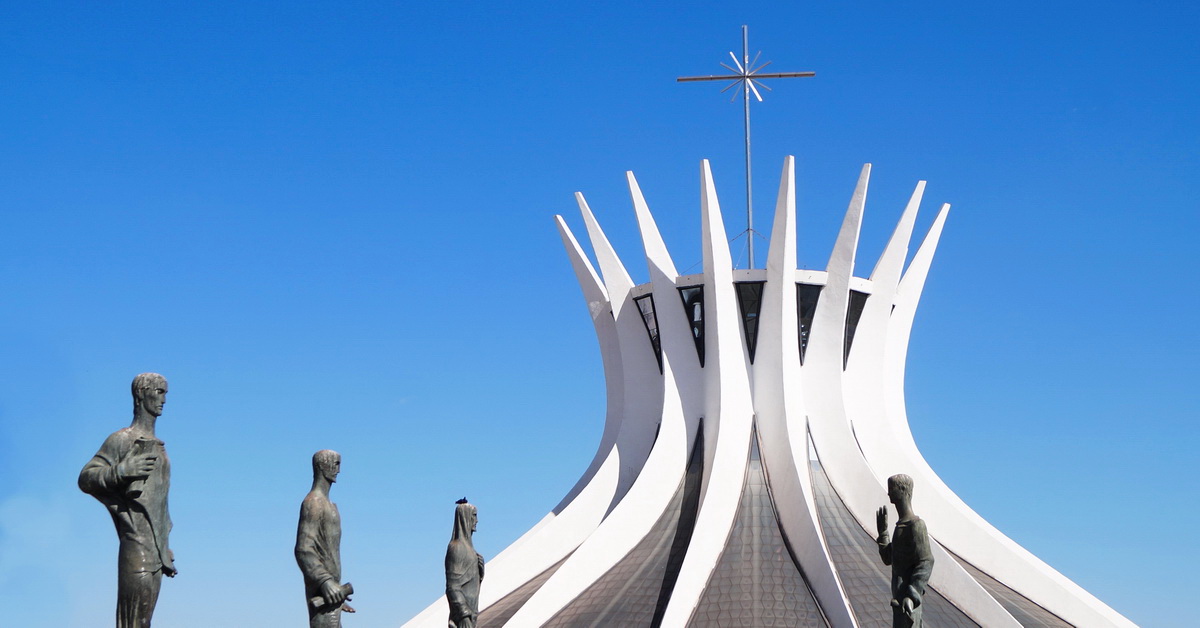 Misión en Chile
I first encountered the city of Brasília while leafing through my grandparents' books. Among the monotonous series of socialist towns… 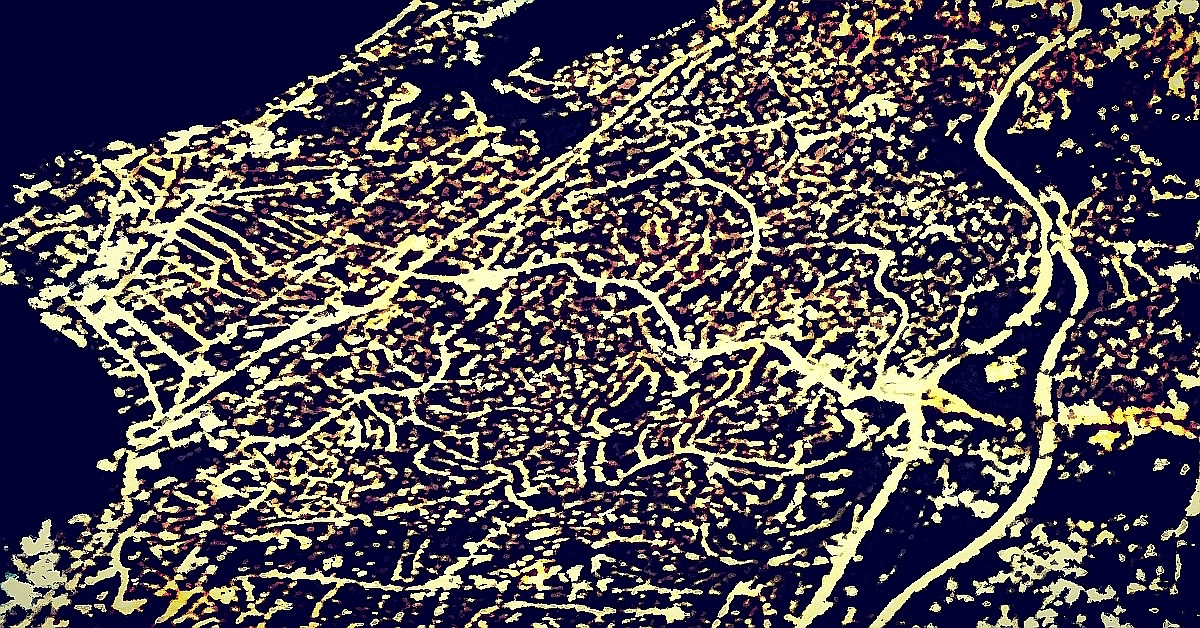 Misión en Chile
In Salvador I manage to master my unconventional way of travel further. In the previous article I mentioned that apart… 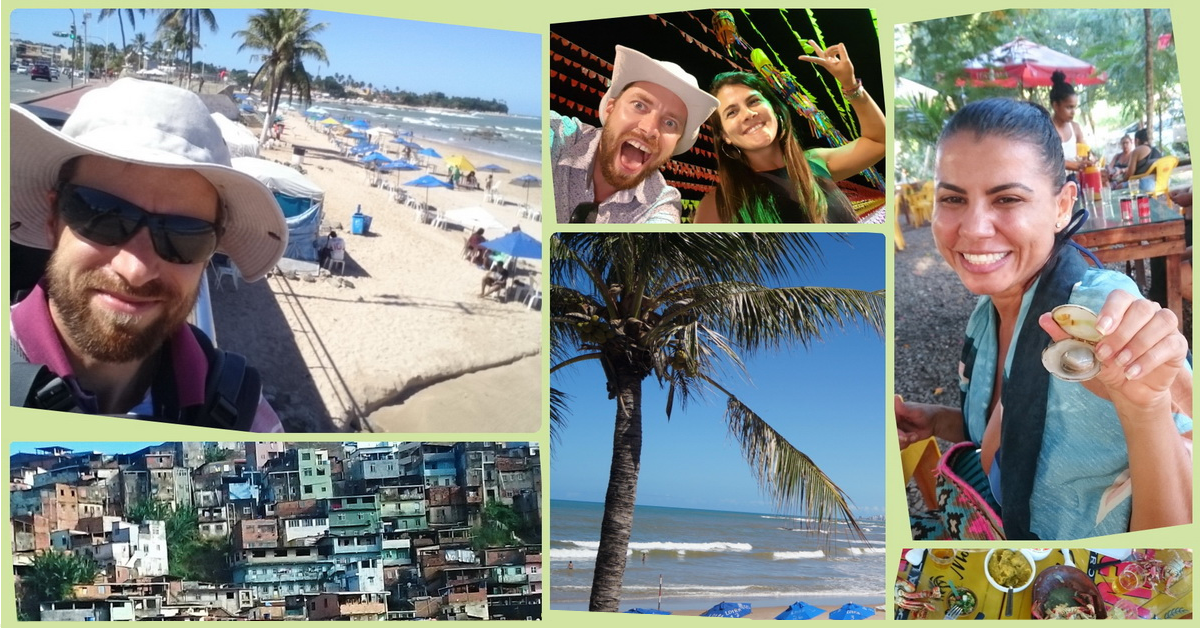 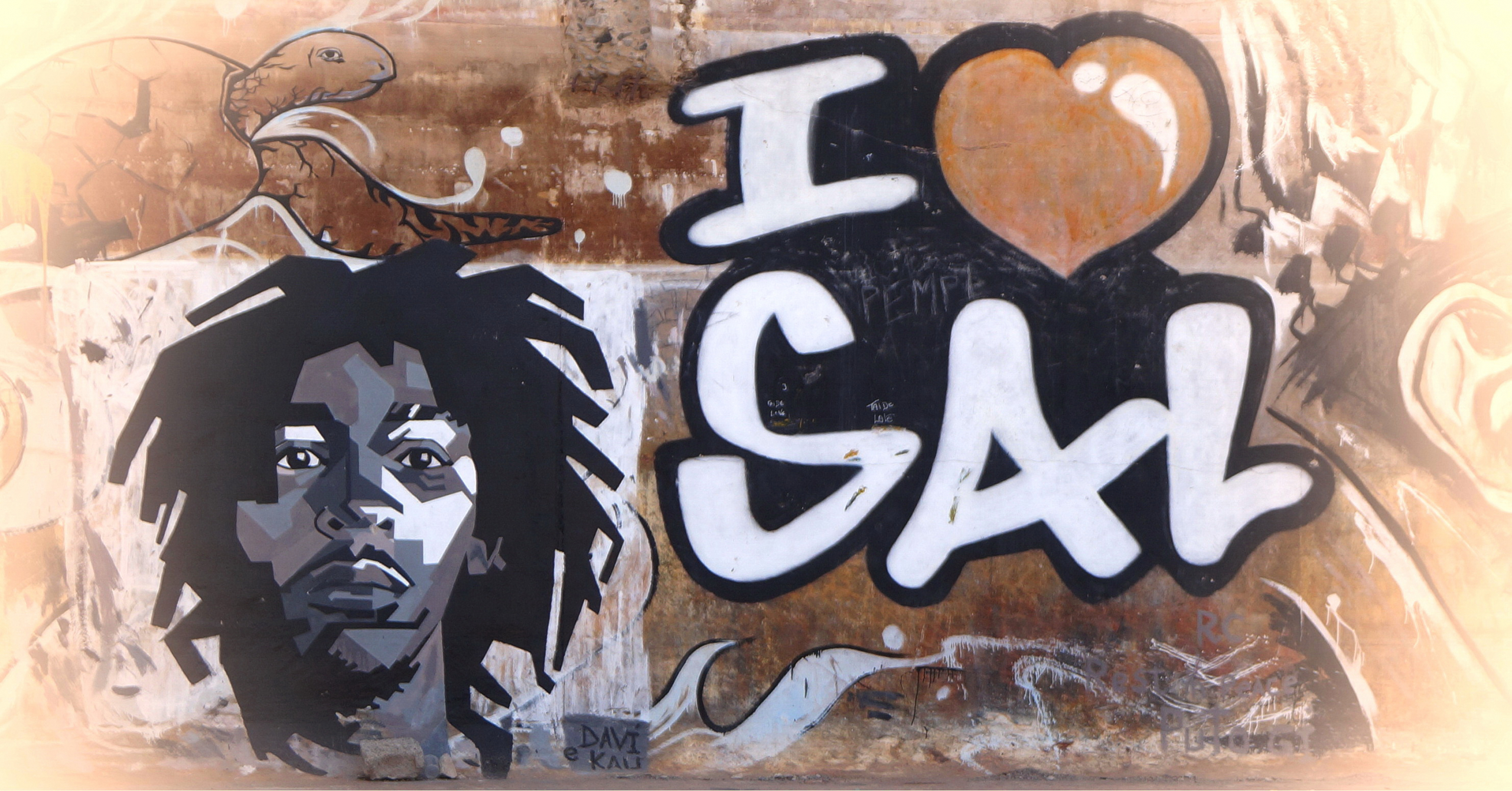 The farther you go, the more you can feel our planet is endless. Your chances to see its horizons, to experience its vastness, to meet its people and to get lost are all unlimited.
This blog was created to offer you an insight into the unordinary life of a geographer, who has set off on a journey to do just this - to see more and to understand more. This is Terrainfinita, a collection of stories and thoughts from our world and about its people.
Enjoy reading.

No results found in this location. Please try again.